Why the SAT Book's Explanations Are Absurd

The Math section of the SAT now tests higher-level concepts that students can expect to encounter in Algebra II (and in some cases, even Precalculus). This means that SAT Math is already difficult enough: as juniors, many students are only in the middle of Algebra II, and haven’t yet learned or fully comprehended some topics that appear on the SAT. Having the general interest of students in mind, and promoting its self-professed goal of leveling the playing field in test prep, the College Board offers SAT Practice Test answer explanations that are crystal clear and written in a way that will help the average student improve his or her test performance, right?

Case in point? The October 2016 SAT has just been released, and a single question from the Math’s No Calculator section demonstrates my point perfectly. Here’s the question. 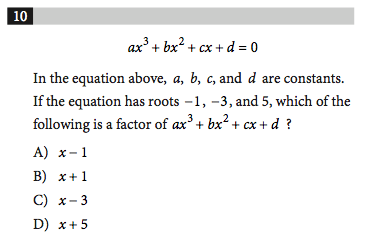 And here's the explanation. 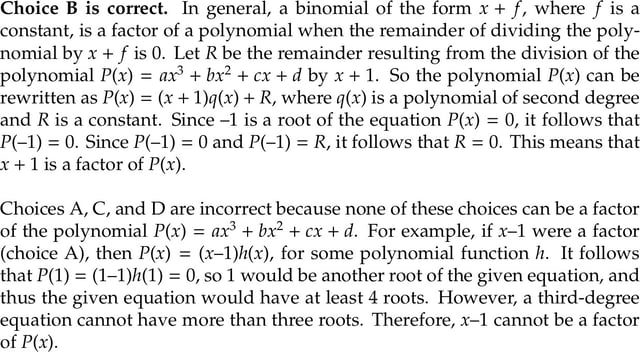 Yeah, okay. I thought this was supposed to be an answer “explanation”, not an answer “obfuscation”.

Nothing here is technically wrong, but there are at least three major issues with this answer.

The real way to solve this problem is demonstrated in the video below. It connects polynomial functions and their graphs in a very simple way––students will understand it, and more importantly, will be able to use it again when they encounter a similar problem. That's the whole point of practice, isn't it?

This is only the tip of the Method Test Prep iceberg. If you want to see how our program––which features hundreds of videos just like the one above––can help you avoid the College Board's "explanations" and make true progress, check out our program here.