Trends on the ACT: Learning from December 2017

At Method Test Prep, we frequently analyze newly released ACTs to learn as much as we can about the ongoing development of the exam. Though the ACT does announce when major changes to the test are forthcoming, it introduces smaller but significant changes under the radar; to ensure we're providing our students the highest level of preparation, we comb the exams for new question types and shifts in content focus. As the most recently released exam, the December 2017 ACT offers a glimpse into the test writers’ minds. Here, broken down by section, are the highlights we want all students and educators to know about.

Best Word for the Context

Especially notable were several “best word” questions. These aren’t new to the ACT, but they have certainly become more difficult. For example, take question 5 below, which asked students to choose a word that would achieve a rhetorical goal.

To an adult, this shouldn't be challenging; however, many students don't know what assailed (the correct answer) means, and may not even know what fervor in the question itself means. The ACT used to use more common words in these questions, but is now challenging students with more advanced vocabulary.

Now, most students I've worked with knew what the sentence is trying to say (that "warm, mellow tones came from the instrument"); the problem is that none of them had ever seen the correct answer, issued, used in this way before. Even process of elimination failed them: appeared appealed to most, despite the fact that when questioned about it, all students agreed that appeared is a visual word that wouldn't be applicable here. When all else fails, students often default to the familiar, even when they know deep down that it's wrong.

We wish we could provide a comprehensive database of words and idioms the ACT uses to create these questions, but alas, there are thousands of possibilities. (In fact, the Vocabulary Builder in our web-based program can help you do just that!) Ultimately, developing reading skills is the key to building a solid enough vocabulary to answer even the most difficult questions in this category.

The ACT has always tested sentence structure as well as the intended meaning of sentences. The questions it poses now, however, have brought the two together in tricky ways. Consider the following example, modeled off of a real ACT question.

Black holes are fascinating objects that force us to stretch our conception of physics, pushing
the limits of our understanding, which is a challenge only a brilliant few can handle.

B. understanding, it is

From a purely structural standpoint, this sentence is fine as is, featuring no major punctuation or grammatical violations. However, when it is scrutinized, the original form breaks down, because the nonrestrictive clause formed by the "which is" makes it sound like our understanding is a challenge, which doesn't make sense: the sentence means to say that the stretching of our conception of physics is the challenge that few can handle. To make the sentence state what is intended, we must choose choice C to replace the original form.

Questions like this represent a marriage of structure and meaning that is difficult for many students to evaluate. Here's how the December 2017 ACT tested students (question 58 in the sentence starting with "Many").

To many students, the original form of the sentence sounds weird, but is close enough to a form most students recognize as correct. This, paired with the fact that most students have never dealt with the word luminaries, drove most students to pick choice F. Unfortunately, the unedited form causes a breakdown in logic: the first part of the sentence mentions "many" individuals, only to name two. This requires a more specific handling, accomplished by the example-oriented phrase in choice G. The subtle but important shift in logic and meaning is something most students miss.

Recent changes on the ACT English thus seek to gauge students' capabilities in recognizing more advanced elements and nuances of the language. The vast majority of points can still be earned by learning rules of mechanics (e.g., grammar, punctuation), and by applying technique to evaluate the relevance and ordering of sentences. Students looking for top scores, however, must be able to go a few steps further and recognize subtle changes in meaning and more advanced elements of vocabulary, idiom, and sentence structure.

The Math section has been relatively consistent over the past fifteen years. Recently, though, the ACT has introduced new question types that test knowledge of topics students tend to encounter later in high school, typically from the Algebra II and Precalculus curricula. Many of these questions, however, are "advanced" only in the sense that many students may not have seen them before––they're not actually that difficult. Take, for example, the following question from the December 2017 exam. 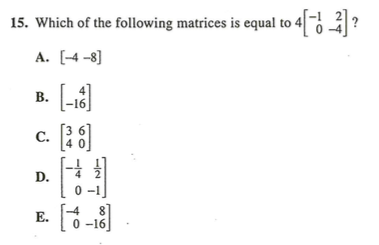 To students who have never before dealt with matrices, this question is intimidating, and probably scares half the students into random guessing. In reality, the correct answer (choice E) is obtained by multiplying everything on the inside of the matrix by 4.

Of late, the frequency of questions testing statistics, probability, and combinations has risen noticeably. Questions on the December 2017 exam included those testing concepts like expected value, mean/median/standard deviation, and combinations of ordered sets. Since it quietly began emphasizing these topics, the ACT has been sprinkling questions that test them into the last half of the exam. Question 54 on the December test was the following. 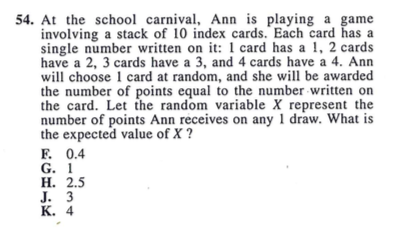 Once again, providing the correct answer is purely a matter of content knowledge: multiply all of the point values by the probability that they're selected and then sum those probabilities, and you have the expected value of the number of points Ann receives on one draw.

The ACT Math has always been more of a content test than an evaluation of mathematical ability; the recent changes suggest this is becoming even truer. Students who are further along in their schools' math curricula are at a real advantage, simply because they will have seen more material by the time they take the ACT.

Of all ACT sections, the Reading has changed the least. The most notable change to the section happened in 2014, when the ACT introduced paired passages, which have appeared in the Reading section ever since. These aren't significantly more difficult than the other passages, but do require students to realize how two writings can be compared and contrasted. The question types remain the same as they've always been, focusing on main idea, word usage, author's intent, tone, and detail. The December 2017 test featured more of the same.

Over the past few years, the ACT Science section has posed new challenges to students, though in ways that are not obvious to the casual observer. There is a greater emphasis on making practical, estimated calculations involving percents (no calculators allowed on the Science!). There are now more questions than ever that introduce hypothetical scenarios related to the experiments in the passages––students must determine how these relate to the experimental data, and then use their insights to make conclusions concerning trends in the data, relationships between variables, and experimental procedures. Many of these questions present as paragraph-long walls of imposing text. Take two consecutive questions on the December 2017 exam as an example. 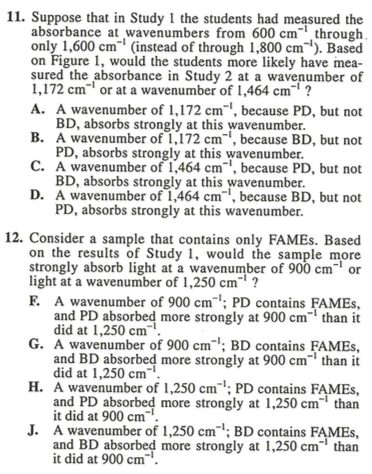 It looks ugly, but all of the necessary information is in the passage. It's getting this information without becoming overwhelmed that can be tough (that's where we come in). More often than not, students are required to evaluate multiple data sources simultaneously, or to consult descriptions of multiple experiments to make inferences. The Science section is more a glorified test of reading comprehension, processing, and logic than of scientific acumen specifically. Yes, there are certain bits of outside science knowledge that benefit students, but mostly, the ACT Science remains as a way of dropping students into unfamiliar territory to see how they fare.

A Cushion Near The Top

Because much of its content has become significantly more challenging, the ACT has adjusted its scoring scales to be softer at the top. Take the December 2017 scoring scale, shown below.

Notice how friendly it is in the 30s. For example, a student could have answered 11 of the 60 Math questions (approximately 18%) incorrectly and still have achieved a 30. Were this a blip, we wouldn't have highlighted it; however, most of the recent exams have been scored on similar-looking scales (they change slightly between exams to adjust for relative difficulty levels). Thus, the exam has gotten more challenging, but there is now a bit more room for error for students who are aiming to nail a 30 composite score.

It is helpful to keep abreast of changes to standardized tests, no matter how minor––under pressure and stress, they can throw students off their game. Students should prepare for the changes by practicing with as many recent, official exams as they can before sitting for the ACT. Learning just a few new question types on each section can make a significant difference in students' scores.