The Most Important Concepts to Study Before You Take the ACT

Sure, this is a long post, but every single student taking the September ACT (or any ACT, for that matter), should read this now.

The next ACT is on September 9th, and while we hope you've been studying diligently over the past several weeks or months, we know that it's tough to motivate yourself to prep over the summer. Thus, if you're taking the September ACT but haven't quite been putting in the time, we've got a list of the concepts you definitely need to review and practice with before test day. Here they are, by section.

We've got the perfect way for you to prep, especially for the content below. Check it out here!

The project began on May 9, 1958, however, residents had to wait ten more years for real progress.

The project began on May 9, 1958; however, residents had to wait ten more years for real progress.

On each ACT, the number of subject-verb agreement questions are about the same.

On each ACT, the number of subject-verb agreement questions is about the same.

The passage makes clear that the gestation period of the quokka is similar to that of a:

The "key" word is something that is likely to be particular to the question, and is unlikely to be found frequently throughout the passage. Here, that word is gestation. On top of that, you can look for any of the names of the four animals listed in the choices, which are also likely to appear only once in the passage. In this way, you can efficiently find information without wasting time.

In their efforts to determine the biodynamic rhythms of an ecosystem, environmentalists can end up mistaking the forest for the trees. By focusing on individual species and their isolated processes, they run the risk of ignoring broader interspecies interactions, especially those that exist between plants and animals.

A. assume that entire forests consist of a single species of tree.
B. forget entirely to consider how ecosystems work.
C. possess a view of ecosystems that is too narrow.
D. consider interactions between plants and animals to be less worthy of study.

If you're not careful, you can fail to consider the broader idea of a paragraph, and instead focus on individual details to guide your answers. This is a mistake, because main idea questions almost always gauge your skills in seeing the big picture. Without looking at the choices, and even without fully understanding the idiomatic phrase highlighted by the question, we can discern that the excerpt is focused on how environmentalists may focus on individuals and separate processes rather than on larger interactions: these scientists, according to the author, pay attention to the small instead of the large context. The answer that encapsulates this best is choice C. Notice, though, how the other choices all try to fool you by bringing up specific words, terms, or ideas that are in the excerpt. To avoid getting fooled, zoom out and consider the larger idea! 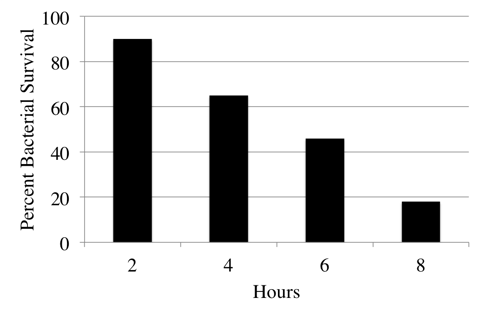 According to the figure, by 8 hours after incubation with the antibiotic, the percentage of bacteria that had been eliminated was approximately:

If you picked choice A, you were fooled. Many students do not look at the axes before they answer questions, and it costs them dearly. Notice how the vertical axis is measuring percent bacterial survival, whereas the question is asking for the percent of bacteria eliminated. By the eighth hour, just under 20% of bacteria had survived, meaning just over 80% had been eliminated. Lesson learned: when you go looking for data, read your axes, make sure you're looking the right place, and never simply assume a table or graph is showing what you think it's showing.

We hope you find these tips useful! If you need more assistance with your prep, get in touch with us here.