The announcement set off widespread panic and caused a lot of uncertainty. We have had some time now to digest a lot of the new information and already have given plenty of suggestions for current Sophomores who will be in the unenviable position of preparing for the SAT during the “transition” year

What has been less discussed is the effect this has on students taking the PSAT in the Fall of 2015. The College 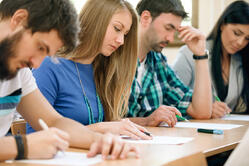 Board initially was ambiguous about whether they would offer a redesigned PSAT in 2015. They eventually announced that they would, but along with it came an announcement that there would be no Saturday offering of the PSAT for the first time in many years.

This has, predictably, upset many school officials. All the schools that traditionally held the test on a Saturday (usually so that they would not lose a day of instruction) now must lose that day or not offer the PSAT at all. Some schools have already decided they will only offer the PSAT to students in the running for the National Merit Scholarship.

Why would the College Board make such a move to risk further irritating schools already vexed by the new SAT? Well, according to the College Board, it is because they deemed the Wednesday version more popular and wanted to offer two Wednesday dates, as opposed to a Wednesday and Saturday date (there would not be enough time to create a third version of the test).

If you are a student that attends a school that is restricting the number of students taking the PSAT, it is important to look into other options to take a timed practice test. The PSAT is not something to stress over, but getting exposure to the test early on can go a long way toward increasing your SAT score.

Elliot graduated from Brown University with a degree in Mathematical Economics. This means he has forgotten more about math than most will ever know. After a brief stint as an insurance analyst, he joined Method Test Prep, where his confident and patient educational style would shine.