Lessons From That Free Quiz

Last Friday, I sent out a five-question quiz that students could use to test their SAT skills. Now that the quiz has been taken almost 200 times, I’ve been able to analyze some pretty revealing data. Before we get into that, a disclaimer: the results aren’t drawn from a “random” sample of students. I could not control who took the quiz, so it’s entirely possible a biased subset of students––or a mix of students, parents, and educators––took the quiz. Thus, the results and analysis below can’t be called “scientific” in any true sense of the word. That said, based on the numbers, I suspect most of the people who took the quiz were high school sophomores or juniors.

The results for two of the questions caught my attention. The first was for the Reading section, and asked students to read the following passage excerpt and answer the question. 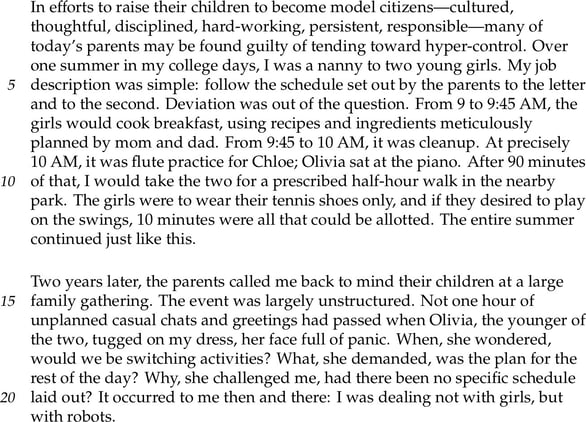 1. To structure the passage, the author uses:

The correct answer is choice C, and while a slim majority (56 percent) answered correctly, a full 44 percent of students answered incorrectly. By far, the most common incorrect answer was choice A, selected by 25 percent of quiz-takers. This was part gratifying and part concerning: gratifying because I specifically designed choice A to be a trap, and concerning because such a high percentage of quiz-takers fell for it. Why is choice A wrong? Two words: data collection. When you see words like "data", "evidence", "proof", "statistics", etc. on the SAT, they mean what they mean. In this case, "data" would have meant "numbers and information collected systematically". This simply doesn't take place in the passage. The reason students tend to pick this answer (or ones like it) is that they have a very loose interpretation of what words like "data" mean. So students: raise the bar and stop accepting words that clearly aren't evidenced by the text. Think carefully about what words mean, and you'll be rewarded!

The next question whose answer pattern caught my eye was number four, the "No Calculator" Math question. It wasn't just that a majority of quizzers answered this question incorrectly: it was that incorrect answers outnumbered correct answers by more than 2 to 1. 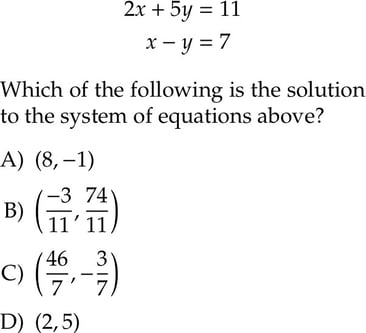 Just over 40 percent of respondents selected choice A. Again, this was the trap, and again, the results were frustrating. For those who selected A, the procedure probably looked like this.

Unfortunately, this method ignores entirely that (8, –1) will not work for the second equation, though some may have plugged the point into x – y = 11 and mishandled the double negative, which would have made it seem like the point did work. (I encourage everyone reading this to see what I mean for themselves.) The true answer is actually choice C, which will work in both equations. (The best way to get the answer is actually not to use the answer choices to work backwards, but to use a system of equations method known as elimination. Take the quiz to see how this is done.) The takeaway here is that students should never simply test using one of the equations. The SAT is notorious for including "decoy" answers that seem to work on their surface, but that fail upon further inspection. So students: be rigorous, and don't fall for it!

What we've learned from this exercise is that it's entirely too easy for the SAT (and ACT, for that matter) to get students to lose points; by presenting answer choices that encourage less thought and a less meticulous approach, the College Board can ensure that many students will miss questions simply due to errors that, in reality, could just as easily have been avoided. So if you're a student set to take the SAT, make sure you're careful! You don't want to toss points where you could have earned them with a little more care.