When students start learning how to write, one thing becomes very clear: everyday writing—the language that appears in headlines and advertisements, for example—is different from the formal writing in essays, books, and other published literature. Everyday writing tends to follow spoken language, casting aside rules that can be violated without incurring damage to the intended message, all for the sake of efficiency. This is made possible by context and experience, both of which supply implicit information to readers, who will seamlessly integrate what they know and what they see to make conclusions about what they are reading.

As we might expect, the informalities built into the speech and text of daily life become firmly baked into our personal comprehension and use of English. Subconsciously, we absorb the language we hear in every YouTube ad or see in every television commercial until it becomes second-nature. And yet, the fact that we understand and adopt this casual mode of the language has no bearing on whether it’s correct in the rules-based writing tested by ACT English Section and the SAT Writing & Language Section.

Consider this in-browser ad I spotted not too long ago. 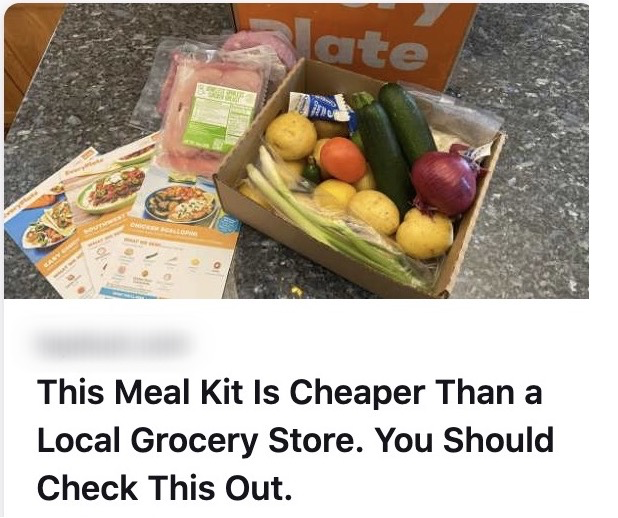 Anyone proficient in English would be able to read this and comprehend exactly what it means: the contents of the meal kit being advertised will cost you less money than you’d spend if you were to go to the grocery store and buy the same ingredients there. Message received and understood, and quickly at that. If, however, this same text were included in a passage from an ACT English section or SAT Writing & Language section, a student who saw no problem with it would end up losing points. Here’s how the text might appear as part of a passage.

In efforts to maximize their convenience and reduce the quantity of food they waste, some consumers subscribe to meal kits. Many meal kit subscribers actually find that the total cost of the meal kits is cheaper than their local grocery store.

To students who are unfamiliar with these exams, this is baffling, and “NO CHANGE” seems a great option. To the well-prepped student, however, there is a clear error—one we call a “faulty comparison.” We understand that the original sentence is supposed to be conveying the message in the advertisement above, but take a look at what it actually compares.

Many meal kit subscribers actually find that the total cost of meal kits is cheaper than their local grocery store.

If this seems nitpicky to you, that’s because it is. That is, in fact, the point: the purpose of grammar sections of these tests is to test students’ ability to recognize errors according to the rules of written English, not spoken English.

The takeaway is not to become a grammar and usage scold or to suggest that we model our daily speech on the technicalia of the written word. Rather, it’s to emphasize how important ACT and SAT prep really is. Without the level of familiarity that courses or tutoring can provide, it’s difficult for most students to reach their potential. And while not every rule or convention tested is as obscure and as tricky as this one, it doesn’t take much for the test creators to write questions that will fool a majority of test takers. Prepare accordingly, and you’ll be in the minority of students able to avoid the cheap traps.