Do you want to improve your score on the ACT Science section? To do so, you must avoid making costly mistakes. Here are some common ACT Science errors and how to keep yourself from making them.

Going to the Wrong Figure

In most ACT Science passages, the figures provide you with the quantitative data you need in order to answer the questions. In many passages, there are multiple figures that look very similar to one another. Here’s an example below.

You may be surprised to learn that, even though these figures are clearly labeled “Figure 2” and “Figure 3,” students regularly reference the wrong figure while working through questions. This is true even when the question explicitly says something like “As shown in Figure 3…” or “Based on Figure 2.” How is this possible? At first glance, the figures look extremely similar: both have the same vertical axes; both have the same keys; both show four conditions on the horizontal axis. It’s only upon more deliberate inspection that you can see these graphs show entirely different things. When students are working quickly, it’s very easy for them to mistake one graph for the other and waste precious time seeking their answer in the wrong place.

Even when you're looking in the right spot, it’s very easy to misinterpret graphical data. This is because the ACT’s graphs can differ ever so slightly from the ones you’re used to seeing in school. How so? Instead of showing raw numbers on the vertical axis, they may show percentages; instead of giving you exactly what you’re looking for, they may give you a related quantity that must be translated to the one needed to answer the question. Here’s an example. 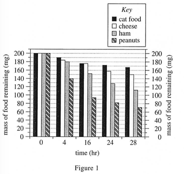 Suppose you were asked to use this graph to provide the food type least preferred by insects whose eating habits had been measured over the 28-hour period. Many students would say “peanuts” simply because its bar is the lowest by the end of the study. This, however, ignores what the vertical axis is showing: mass of food remaining. Since the same mass of each food was present at zero hours, and since the bar for peanuts was lowest at 28 hours, it stands to reason that peanuts were actually consumed at the highest rate. Cat food, it seems, was “least eaten” and thus least preferred by the insects.

You must watch your vertical axes. This seems like it should go without saying, but too often, students assume the graphs they’re given will simply show them the necessary information straight away. That assumption often proves wrong, and costs many a student several points.

Failing to Reference the Text

Though you’ll be able to answer the majority of ACT Science questions by using the provided tables and figures, there are some questions on the section that you cannot answer without referencing the text around the figures. These include the “experimental procedure” questions, which ask students about the process and procedures used to conduct the various experiments and studies outlined in the ACT Science passages.

If you're not seeing the information you're looking for within the graphs and tables, go to the text

The ACT Science section is a mental sprint, requiring exceptional pacing and time management skills. These take time to develop, and need to be reinforced constantly. Many students let one or two questions drain 2-3 minutes—this is just too much time, and will prevent them from finishing the section. To avoid suffering the same fate, you must practice taking full-length ACT Science sections with timing. Only by forcing yourself to compete with the clock will you be able to manage your pacing effectively.

The ACT Science section presents several unique challenges, but the right advice paired with the right habits can help you increase your score!