Changes to the SAT: What is Happening and Why the Change? 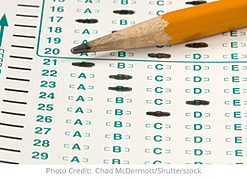 Yesterday, the College Board released extensive information detailing the changes behind the new SAT, which will be administered for the first time in spring 2016. While there were hints of what was to come, we now have topic lists and sample questions that present the form and content of the updated exam.

In this series of blog posts, we'll explain the changes to the SAT and reflect on their impact on students who will eventually take the exam. We'll go into detail about the motivations behind the College Board's decision to revise the exam, and examine how standardized testing as a whole will be changing in the next few years. Our goal is to inform you–––the students, parents, counselors, and educators so important to Method Test Prep–––so that you can begin to prepare for the new test's arrival. Look for updates every day starting Monday, and let us know what you think!

Part I: The What and Why of these Changes to the SAT

Talk to any educator about standardized college admissions exams, and you'll likely hear a version of the following: "The SAT and ACT are terrible: they don't tell us anything about our students' abilities or success. It's a shame these kids are so pressured to take them." While the efficacy of these tests as predictors of college preparedness and success has been a consistent and impassioned topic of debate, there's no denying that standardized college admissions exams get a bad rap. Increasingly, there has developed a perception that the SAT and ACT are biased, favoring students who have the resources to pay for prep, and that these tests unfairly evaluate students using limited criteria of questionable relevance. Despite recent evidence that suggests the SAT and ACT do positively correlate with student success, the College Board was forced to deal with the realities of public opinion and perceived relevance among educators: it had to revise its flagship exam.

In addition to handling its test's perception, the College Board has paid attention to the current state of American education. As cited in the Executive Summary of today's release, "57 percent of SAT takers in the 2013 cohort lacked the academic skills to succeed in college-entry, credit-bearing courses without remediation in at least one subject […]" That's a humbling statistic, and one that educators the nation over need to address. To develop the new SAT, the College Board sought input from top secondary and post-secondary educators, whose feedback, paired with statistical research, made it clear that college- and career-level demands have for some time been wholly misaligned with the skills and abilities students gain in high school. The College Board claims that its primary goal in revising the SAT was to develop a college admissions exam that measures students' abilities against what is expected of today's high school graduates.

So what has the College Board created? The team at Method Test Prep has been busy analyzing the changes to the SAT, and the new test is indeed a very significant overhaul: new sections, new timing, new answer choice format, new question types, new sub-scores, and a new essay section make up the bulk of the revisions. There will be vestiges of the current exam featured on the new one, and many of the skills students need to succeed on today's SAT will be relevant tomorrow; nevertheless, the format and style of the new SAT constitute a major departure from the SAT of years past. As intimidating as this all may seem, fear not: Method Test Prep's team of educators is on top of its game, ready to answer the most pressing questions. Check back here each day next week for updates about the new test!