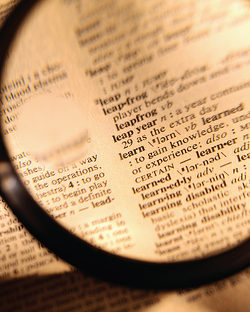 Sometimes studying for the ACT can seem frustrating, and you feel like your ACT prep classes or study guides are the most boring things in the world.

But all that studying the “boring” way is guaranteed to help you succeed in the long run, especially compared to the plethora of bad studying ideas you could be doing instead.

Don’t believe us? Here are 4 bad ideas for ACT English study that seem awesome… until you realize how terrible they are:

How cool would it be if you could study a Spanish textbook and understand English better? Or maybe Dutch is your thing, because technically that language is closer to our modern-day English.

Next time you get bored with your ACT test prep course, grab an English-Spanish (or English-Dutch) dictionary and go to town.

2. Sleeping with a dictionary under your pillow.

Have you ever heard of osmosis? It’s the idea that you can learn things gradually without much effort.

Some people think that if you put a dictionary or English textbook under your pillow at night, you’ll experience osmosis and learn the material you need to for ACT prep. Try it and see if it works!

3. Watching a ton of films/television

If script writers were smart enough to get into Hollywood or on television shows, they must have great vocabularies, right?

That means the more you watch TV and movies every day after your classes are over, you’ll be more likely to pass the ACT!

4. Going back to the basics.

If you’re not getting all this high-school level English stuff, you should probably go back several years and start over.

For example, if you don’t remember whether “i” comes before “e,” you could pick up some grade school English textbooks to help you study.

Or you could combine this tip with the previous one and watch something like Sesame Street. It’s your call!

5. Studying for the other sections of the ACT only.

If you’re going to be doing the math and science sections of the ACT, too, why not only study for those and ace them? That means you’re still going to get a 50/50 chance of passing the whole test with a good score.

Also, math and science have some pretty complicated words. Understanding these will be sure to help you on the English and Reading sections of the ACT.

In all seriousness, these tips would never work for real ACT test prep. We don’t encourage you try these. Ever. (We can’t be held responsible if you do.)

What does work are ACT prep classes, which Method Test Prep offers, and they’re anything but boring. If you sign up, we guarantee your ACT prep will turn out way better than if you followed any of these bad ideas.